Alex Au Wai Pang, also known by his Internet nom de plume as Yawning Bread, is regarded by many to be the founding father of the Singapore gay equality movement. 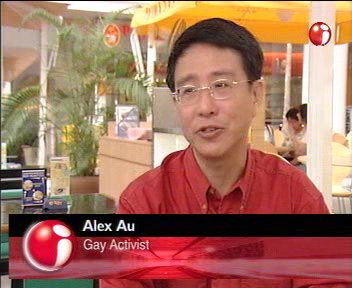 Alex Au during Singapore's first television interview with a gay activist, broadcast on Channel i News in July 2003

He is the author of an award-winning website where he provides analyses of Singaporean politics, gay issues and miscellaneous subjects. The articles, archived since 1996, delve beneath the orderly veneer of Singaporean culture and provide insight into aspects of local society that are not usually apparent to the casual observer.

Au, an English-educated Cantonese, was born in Singapore in 1952. He attended the Anglo-Chinese School for his primary and secondary eduction and obtained his tertiary degree from the National University of Singapore.

After graduation, he worked in a managerial position at the Singapore branch of British multinational company Imperial Chemical Industries (ICI) overseeing mainly marketing and regional business development before branching out on his own as the proprietor of several business catering to the gay community.

He was the founding member, together with Dr. Russell Heng, of Singapore's main gay equality lobby group People Like Us, and also the founder and list owner of the Singapore Gay News List (SiGNeL), the first discussion forum of Singapore's gay intelligentsia.

For almost two decades since the 1990s, he was the leading representative of the local LGBT community in the latter's relationship with the media. He was the first person to be quoted in the press as a gay activist and was the first such activist to be interviewed on television. He has given numerous lectures to the general public, both locally and overseas, and continues to play an active role in contributing to the development of civil society in Singapore.

In 2011, Au joined Transient Workers Count Too (TWC2)[1], a non-profit organisation dedicated to improving conditions for low-wage migrant workers, and for many years served as its Treasurer. Au has special responsibility for a number of portfolios including communications, internal data and case management systems, and international relations.

In mid-April 2020, Au was interviewed on video by ABC News (Australia) regarding the massive outbreak of infections amongst Singapore's migrant workers during the Covid-19 pandemic.